DUE WEST – This year’s theme for Due West Robotics teams, “Whatever It Takes,” last year’s theme, “All In.”  Due West Robotics is a 501(c)3 Non-Profit Organization that utilizes donations and grants to further STEM (Science, Technology, Engineering, Math) education and life skills in the community’s youth.  Parents and professionals volunteer their time to mentor these students in the different areas of STEM.  Due West Robotics President, Charles Angel, began Due West Robotics in March of 2012 out of a vision and desire for his child along with three of his friends to be able to participate in FIRST.  Since that day, Due West Robotics has grown into two Jr. FIRST Lego League (Jr. FLL) teams, three FIRST Lego League (FLL) teams, and a brand new high school team this year in FIRST Tech Challenge (FTC).  Due West Robotics also supports a Makers Club, Rocketry Club, and many other clubs plus summer workshops while supporting community outreach to the community.  While all of these children learn a lot in the STEM fields, they also learn many life skills such as giving back to the community.  The Due West Robotics students along with their mentors and coaches help other teams get started in schools and other communities.  They have also participated in community outreach.  For example, they organized a Coopertition Scrimmage and partnered with Erskine College to host it on campus.  The Coopertition Scrimmage allowed other robotics teams to come to Due West and compete with each other while assisting each other with helpful information to take back with them for their teams to use during the FIRST season.  Due West Robotics also hosted an Open House for the community to highlight what the Jr. FLL, FLL, and FTC teams do during the season on Erskine College’s campus.  Erskine College has also leant space to Due West Robotics for teams to meet on campus, and for the FLL team, The Narwhal of Ideas, to work on an aquaponics project for their season.  Partnering with Erskine College, businesses, and the community has opened up so many opportunities for these students for their futures in the STEM fields.

This year, all of teams who have competed so far have come away with knowledge and friendships that will follow them for the rest of their lives.  These students work hard, but have an immense amount of fun doing it. While the Jr. FLL teams have just started their season, the FLL teams have completed theirs.  All three FLL teams moved on to the state competition which is quite an honor.  They competed against 48 teams in South Carolina for a spot at Worlds that is hosted in Houston, Texas.  Even though Due West Robotics FLL does not have a team going to Worlds this year, last year the Tornado of Ideas FLL team did move on to Worlds in Texas.  One team did receive quite an honor this year.  The Narwhal of Ideas, one of the FLL teams, was nominated at State for the FIRST Lego League Global  Innovation Award for their aquaponics project.  This means they will continue to work on their invention with a chance to win $20,000 to help them to make it a real product.  Again, their partnership with Erskine College Biology and Chemistry Departments and Clemson Aquaponics has helped to bring out the young inventors/entrepreneurs in this group of youth.  The Due West Robotics FIRST Tech Challenge team, Electron Interference, had their State Competition February 2-3, 2018.  This team of nine high school students competed against other South Carolina teams for a spot at the FTC South Super Regionals.  This rookie team brought home the 2nd Place Inspire Award, 1st Place Think Award, 3rd Place Connect Award, 3rd Place Rockwell Collins Innovate Award, 2nd Place Motivate Award, and 3rd Place Control Award, plus two Dean’s List semi-finalists with one semi-finalist moving on as a finalist that will attend Worlds in April 2018.  Not only did the team bring home these awards, but Electron Interference moved on to the FTC South Super Regional on March 2018 to compete against 72 teams from 13 states.  What a huge honor for this rookie team from Due West, South Carolina!  Bosch Anderson and Erskine College have been great sponsors of this team.  Along with Bosch Anderson and Erskine College, other businesses that have sponsored Due West Robotics this year are:  Eaton, SAGE, Abbeville Area Medical Center, Dunn & Associates, WCTEL, Due West Family Medicine, Abbeville First Bank, The Renaissance, Prysmian Group, Colgate-Palmolive, Cardinal Health, Town of Due West, Edward Jones, Quality Cabinets, Palmetto Bank, HopeSouth Credit Union, Lions Club, Liberty Storage Solutions of SC, Paul L. Agnew Attorney at Law, and Dr. Patricia (Trish) Hayner.  Without the support of these sponsors in our communities, these opportunities would not be available for our youth.

This shows that when one person has a vision, such as Charles Angel, and partners with many groups, companies, and volunteers plus receives the support from the community, the opportunities that become available for our youth are endless.  Due West Robotics has definitely done “Whatever It Takes” and has been “All In” to give opportunities to these students through the years.  As these students continue to learn and grow in these wonderful life experiences while participating in these opportunities in the STEM fields, they will take with them the knowledge and experiences along with the connections they have made well into their adult lives.  Due West Robotics will have the first student graduate out this year.  There is no doubt with the experiences and accomplishments this young lady has had, she will be a wonderful asset to her community, to her college of choice, and to the business that hires her in the future.  This is the end goal that everyone hopes for when it comes to our youth and the future of our communities and businesses. 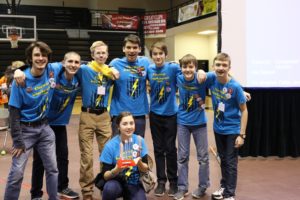